If you can IMAGINE it.. You can CREATE it!

I gotta say, up until early this year.  I had been dreading this day, I didnt want it to come around AT ALL!  I had actually decided I was not going to turn 40, I was going to turn Thirty-Ten. 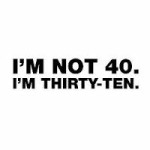 Its an interesting concept.  I didn’t mind turning 30, in fact I had been telling everyone I was 30 since I was in my early 20’s.  I know this may sound strange, however I do have an explanation.  I had my daughter at 19 and I found people to be very judgmental and they felt the need to ask me lots of various questions about having a child at such a young age. I found to avoid this I just said I was 30 and got the standard “Wow you look so good for 30” lol, “No Shit” I was in my twenties.  However doing this caused a big problem for me for the first half of my 30’s.  When I actually did turn 30, I couldn’t ever remember how old I was once I got into my 30’s, I had been 30 for so long I wasn’t used to counting up to my real age.  Sounds silly, but it really was a problem for me.. lol

When I hit 35.. 36.. no I was 35, see told you I struggled to keep track of my age in my early 30s, I became devestated at the thought of turning 40.  I loved being in my thirties.  I didn’t want to be a 40 something year old woman.  I hadn’t achieved enough, I wasn’t where I felt i should have been for a 40 year old woman.  Or where I had always pictured myself when I was younger and dreaming of where I would be in my life when I was my “Mums age”  She died at 51.  So I was dreading getting close to that too, turning 4o meant I was sooo much closer to being 50.  I heard someone once say that they were turning Fifty-ten, obviously in denial about turning 60. So turning Thirty-Ten seemed to be the best option for me.. Yes I was totally in denial too.  Whenever I mentioned this to anyone, they were very amused, which encouraged me more to keep that mentality.  I am sure you are amused too reading this, because honestly its a great concept.

Last year shook me out of this delusion.  It was late February and I woke up, after going into what I thought was exploratory surgery after being extremely unwell for 2 weeks, with a colostomy bag.  My bowel had burst.. yes it was shit.. yes.. I meant that Pun!  I was very sick, on heavy duty antibiotics, intravenously fed Pain Killers and was left with a Colostomy Bag.  I have to admit, I fell into a deep depression, yes I was alive, yet I hated what happened to me, I kept questioning myself “What did I do to deserve this?” “why me?”.  I hated the ugly thing on my abdomen (the stoma), I hated the disgusting bags I had to stick there to catch the filth and then the ugly scar left in its place once they did the re-connection surgery and joined my bowel back up.  I was totally in Victim mode.  I wanted to blame someone, so I was punishing myself and lots of people around me.  When you push people away and they leave and you are blamed for wrong doings and life seems shit… It backs up your victim mentality, proves you are shit.  This isn’t true, I do know that now, I am explaining being stuck in the victim  ‘frame of mind’ cycle.

I had a deep and meaningful conversation with my Surgeon after my second surgery.  he asked me how I was feeling mentally and when I burst into tears, He explained that Yes what happened to me definitely caused me psychological distress, but having a General Anesthetic, well three actually in 2015, could have also been a major cause of the depression too.  Post surgery depression is something not really talked about, but is a serious thing.  So being in the depths of despair during that time started me on a journey of self discovery.  I felt that I had to ‘FIX’ myself, because I felt broken and damaged and hated myself.

I joined a tribe for helping me to “Get Shit Done!”.  This tribe was an on-line group of like minded people all there for the same reason.  We had tasks to do and we had to post things in the forum regularly, check in with each other and support everyone in the tribe.  I made a couple of really good friends in the group, who are on the other side of the world.  That then once it was finished connected me to another FB group, again like minded people supporting each other, I affectionately called it online therapy, but technically its not.  I then joined in on a 30 video challenge that was being held.  Which consisted of uploading a 1-5 minute video of myself talking, sort of a video diary every day for 30 days.  This was very uncomfortable for me at first.  I hated hearing myself recorded let alone see myself or let anyone else see me on video.  The process and exercise did wonders for me.  I relaxed with caring what people thought of me. I relaxed more and wasn’t as hard on myself.  I was making connections and seeing myself though other peoples eyes.  I had support from hundreds of people and they could relate to me, to MY story.  I was being totally AUTHENTIC, I was actually helping people and they were helping me.

As I stopped hating myself so much, I honesty did start feeling grateful for being alive. Happy that I was getting another chance at life.. I was told I was really only about 24 hours away from being dead.  As I have appreciated myself and valued my place in the world more deeply, I have come to appreciate that I have been on this earth 39 years.  Not everyone gets to achieve that.

So turning 40 today is a proud occasion.  I made IT!  I carry some ugly memories and my body is scarred, SO WHAT, they are reminders that I am a Strong Woman, that I can over come major set backs and come out the other side VICTORIOUS!  I now look forward to making awesome memories, living my life to the fullest, seeing places around the world and Enjoying what I can make of the next 40 years of my life.

FYI: I did toy with the idea of turning Forty-Ten (in ten years time) for a fleeting moment and stay in my forties forever… lol.  I decided with what has happened to me that I need to rejoice about my age, be grateful for that number increasing and cherish and enjoy each year that I get to add to my age. Live each one and not resent that number, That is true gratitude!